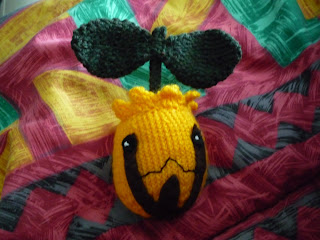 Created for the June CAL/KAL on Pokemon amigurumi. This pattern is converted from a crochet pattern. The original creator and pattern can be found in the links at the bottom.

stst = Stockinette stitch. Knit being the right side and Purl being the wrong side.
Kfb = Knit front and back into a stitch to increase.
K2tog or P2tog = Knit or Purl 2 stitches together to decrease
B and T = break of yarn leaving a long end and thread through sts left on the knitting needle and pull tight to close the hole then fasten off
I-cord= Knitted on Dpn's. cast on stst then knit as normal, instead of turning to purl, push the stitches to the end of the dpn and knit again pulling the wool behind the stitches. After doing this for a few rows you will see the cord appearing, pull the cord to tighten the stitches.

If knitting in the round divide the stitches equally among the needles and when it says to Purl a row Knit instead. Stuff as you go.

Sew up back seam stopping 2 inches from the top to stuff. Sew up rest of seam adding more stuffing before closing up. 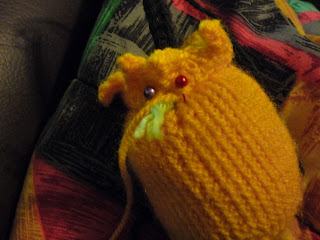 
Pin round he head using the yarn marker as a guide and then sew the left over tail to sew round.

Cast on 5 sts on double pointed needles, place a pipe cleaner/chenille stem at the back of the knitting and knit around it. Knit as an I-cord for 12 rows.
B and T

Sew up both ends making sure to cover the ends of the pipe cleaner/chenille stem, then sew stem to top of head as shown.

Sew cast off edges together and then sew to stem just below the top so some of the stem can be seen above them. I found that the leaves
started to curl, so I backstitched down the middle and around the edges to make it firmer. 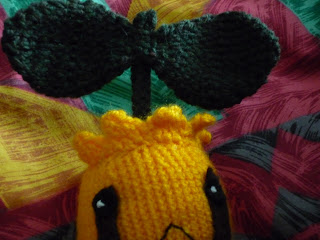 Place pins where the stripes are going to end, like in the photo. Measure the length between the pins for the middle and 2 side stripes. Remembering that the 2 side stripes will cross over at the bottom as show. Cut three strips of felt in brown to the right length, mine were cut to 1 cm wide but you may need to make them wider depending on how big the head is. On one end cut two notches to resemble the pieces as shown in the picture, on the other end, cut to a slightly rounded point. Place the stripes on to the head using the pins you have placed. When you are satisfied with the placement, sew on securely using matching thread. 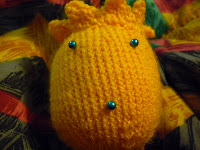 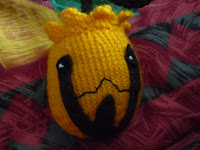 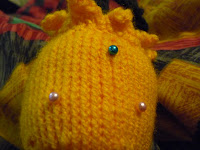 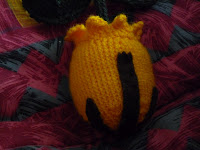 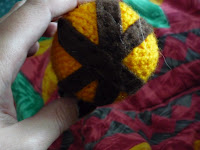 Cut 2 circles from black, I used the end of a pen to get the right size. Then position them as shown and pin. Sew them on and then add highlights using white thread to make french knots. Embroider mouth as shown centred above the middle strip.

Sunkern and Pokemon are copyright Nintendo.
Original Crochet pattern by Linda Potts and can be found here:
http://wolfdreamer-oth.blogspot.com.au/2009/07/sunkern-plushie.html

Posted by Marmokachi at 12:56
Email ThisBlogThis!Share to TwitterShare to FacebookShare to Pinterest
Labels: Pokemon., Sunkern

I use 3.25 and 4mm double pointed needle on most of my projects. If I use straight needles they are normally the same size.
I almost always use Dk yarn for my toys. Very occasionally I will use yarn I get free off magazines, they claim its Dk but I'm not convinced.

Marmokachi
My current goal is to convert crochet patterns into knitting so more patterns are available to people who are hopeless at crochet like myself. Please do not claim these patterns as your own. If you wish to share these patterns, you may link to the pattern but please do not reprint it on your site and give me the credit that is due for the concept and pattern.You may print and keep a copy for your own personal use but you may not sell or distribute it.