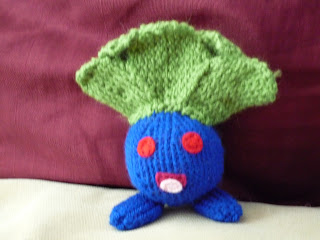 Created for the July CAL/KAL on Pokemon Amigurumi

stst = Stockinette stitch. Knit being the right side and Purl being the wrong side.
Kfb = Knit front and back into a stitch to increase.
K2tog or P2tog = Knit or Purl 2 stitches together to decrease
B and T = break of yarn leaving a long end and thread through sts left on the knitting needle and pull tight to close the hole then fasten off
I-cord= Knitted on Dpn's. cast on stst then knit as normal, instead of turning to purl, push the stitches to the end of the dpn and knit again pulling the wool behind the stitches. After doing this for a few rows you will see the cord appearing, pull the cord to tighten the stitches.

If knitting in the round divide the stitches equally among the needles and when it says to Purl a row Knit instead. Stuff as you go.

Cast on 6 (6)
Purl
Kfb to end (12)
Stst 9 beginning with a Purl row (12)
B and T
Sew up the back stopping 2 inches from the top so you can stuff lightly then finish sewing up. Then pin to the bottom of the body and sew in place. 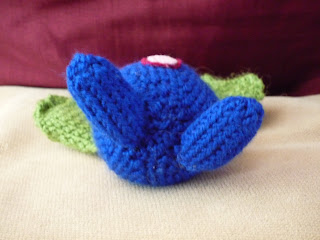 I found that the leaves started to curl, so I backstitched down the middle and around the edges to make it firmer. Pin the leaves to the top of the head. The first leaf should be in the middle with two either side, then place the last 2 leaves at the back of the first three with the tops poking out of the gaps between the leaves. 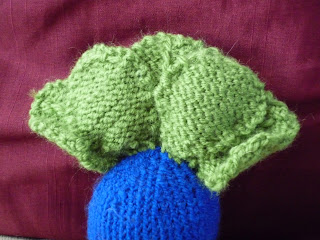 Cut two small circles for the eyes and sew in place. You can either embroider the mouth or cut one out of felt.
Oddish and Pokemon are copyright Nintendo.
Original Crochet pattern by Linda Potts and can be found here: http://wolfdreamer-oth.blogspot.co.uk/2009/07/oddish-plushie.html

Posted by Marmokachi at 06:01
Email ThisBlogThis!Share to TwitterShare to FacebookShare to Pinterest
Labels: Oddish, Pokemon.

I use 3.25 and 4mm double pointed needle on most of my projects. If I use straight needles they are normally the same size.
I almost always use Dk yarn for my toys. Very occasionally I will use yarn I get free off magazines, they claim its Dk but I'm not convinced.

Marmokachi
My current goal is to convert crochet patterns into knitting so more patterns are available to people who are hopeless at crochet like myself. Please do not claim these patterns as your own. If you wish to share these patterns, you may link to the pattern but please do not reprint it on your site and give me the credit that is due for the concept and pattern.You may print and keep a copy for your own personal use but you may not sell or distribute it.